The Series 7 family is Adaptec’s versatile line of 6Gb/s RAID controllers, bringing Adaptec into the PCI Express 3.0 market. The driving force behind the Series 7 is that no expanders are needed to connect up to 24 devices, allowing for a less costly and less complex design. There’s also clearly a density benefit with an Adaptec-based deployment, as most competitive solutions use 8 port designs that require expanders as port count scales. The new Series 7 family are Adaptec’s first generation of controllers reap the benefits of the merger with PMC in terms of engineering and production capabilities.

The Series 7 family is Adaptec’s versatile line of 6Gb/s RAID controllers, bringing Adaptec into the PCI Express 3.0 market. The driving force behind the Series 7 is that no expanders are needed to connect up to 24 devices, allowing for a less costly and less complex design. There’s also clearly a density benefit with an Adaptec-based deployment, as most competitive solutions use 8 port designs that require expanders as port count scales. The new Series 7 family are Adaptec’s first generation of controllers reap the benefits of the merger with PMC in terms of engineering and production capabilities.

The Series 7 is based on PMC’s 24 port PM8015 RAID-on-Chip. This technology combines a x8 PCIe Gen3 interface with 6Gb/s SAS ports, creating a new generation of high-performance RAID adapters that are able to rival any other ROC on the market. The Adaptec Series 7 RAID adapters are available with 8, 16, or 24 native SAS/SATA ports, which offers system builders and those who prefer to roll their own, a tremendous amount of flexibility. For storage-centric systems, freeing up PCIe ports can make a substantial difference when considering high-performance PCIe storage and multiple interconnect cards. In some cases, Adaptec cards will be the only viable option to solve creative storage deployments. 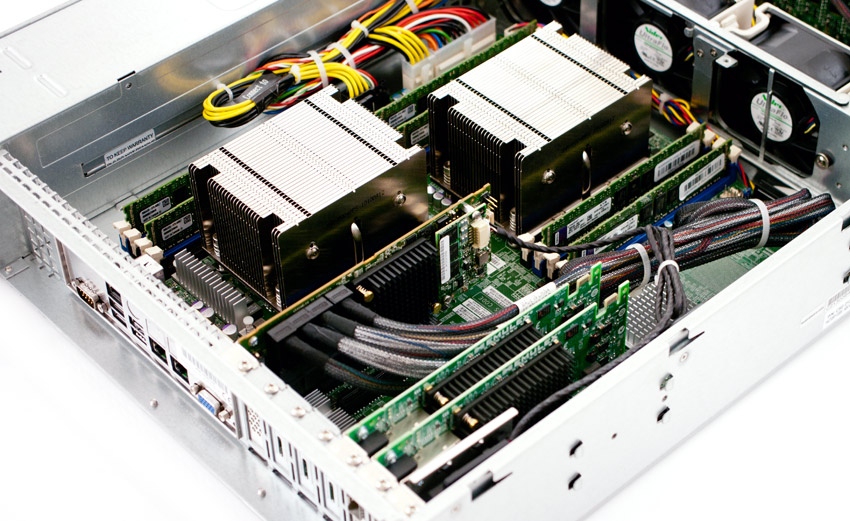 Adaptec also offers the Series 7Q line, which we leverage in a number of projects. The biggest difference between the two versions is that 7Q controllers feature maxCache 3.0, offering read and write SSD caching for increased IOPS and lower latency. With the ability to designate SSDs as large caches, this type of setup significantly increases the amount of total caching space available over more standard RAID card configurations. Additionally, maxCache 3.0 also includes the Optimized Disk Utilization (ODU) feature, reaching up to 450,000 IOPS according to the company. As the capacities of SSDs continue to increase, using the entire drive as a cache-pool is becoming less attractive; however, with ODU, SSDs can be partitioned into both a cache pool and a logical device, giving the end user more configuration options with their flash storage. Unlike the cache pool, the logical partition is exposed to the operating system and can be used to install an OS on it as well as to store other data that needs fast, low-latency access.

The Adaptec Series 7 family controllers ships with a 3-year warranty.

The Series 7 RAID cards come in both half-length and full-height form factors, measuring in at 4.198″ x 6.6″, providing 24 native SAS/SATA ports.

Right away, you will notice something different about the Adaptec card. Instead of seeing the usual SFF-8087 (mini-SAS) connectors that are a staple among RAID cards, you will see SFF-8643 (mini-SAS HD, iPASS+ HD) connectors. These new high-density connectors and cabling gives the Series 7 Adaptec cards the ability to fit 16 ports in a low-profile, half-length PCIe form factor. This is a huge improvement for us at StorageReview, as most PCIe expansion slots in servers are LP MD2. Adaptec decided to use the SAS HD cables quite a bit early in order maximize the potential of the PM8015. Due to the cabling’s thinner profile and flexible nature in tight spaces, cable routing, configuration, and management is easier and much more ideal in situations like ours.

The Four SFF-8643 connectors are facing upwards near the bracket as well as two facing towards the rear. The adapter connects through a PCIe Gen3 x8 slot; however, it is also backwards compatible with PCIe Gen2. The Adaptec Series 7 supports 1024MB DDR3-1333 DRAM for caching, except for the 71605E, which is offered in 256MB.

The Series 7 adapters function 0°C to 50°C without the ZMCP module, while operating between 0°C to 50°C with it installed.  For optimum performance, the card requires 200LFM of airflow; if the heat threshold exceeds the temperature limit, the adapter will throttle . As far as power is concern, the Series 7 adapters will consume approximately 12 to 18W, depending on the port count.

At the center of the Series 7 RAID controllers is the PMC8015 processor.  Despite its relatively small size, this chip has the ability to boast an impressive 6,600MB/s in sequential speed and 450,000 IOPS in random read speed easily outperforming the x8 PCIe Gen3 connection.

The Adaptec 7-series cards were used in the following storage appliances that we previously reviewed:

The Obsidian Series 900D Super Tower is currently Corsair’s most high-end case and is equipped with ten expansion slots, up to fifteen internal 3.5″ drive bays, supports dual bottom-mounted power-supplies, and a wide range of other features with a variety of applications. This system is for serious enthusiasts with big demands; whether it’s for a powerful gaming PC or a beast of a file server, the 900D gives consumers a copious amount of configurable space. 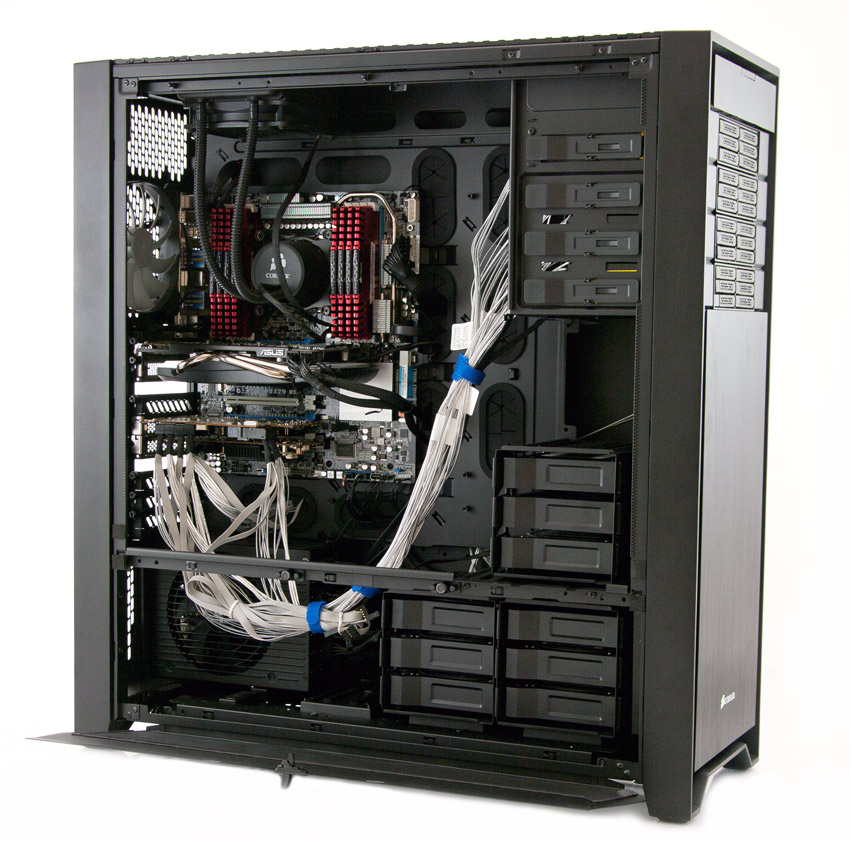 Included inside the Series 900D we installed a 16-port Series 7Q Adaptec card  (71605Q) used as the maxCache 3.0 Accelerated bulk storage. Attached to the Series 7Q are six Hitachi Ultrastar A7K4000 4TB hard drives in RAID10 giving us a bit over 11TB of capacity as well as two Corsair Neutron GTX 200GB SSDs for cache. Also equipped is the Adaptec 72405 for scratch space, which has twenty-four Corsair Neutron GTX 200GB SSDs attached to it in RAID0. 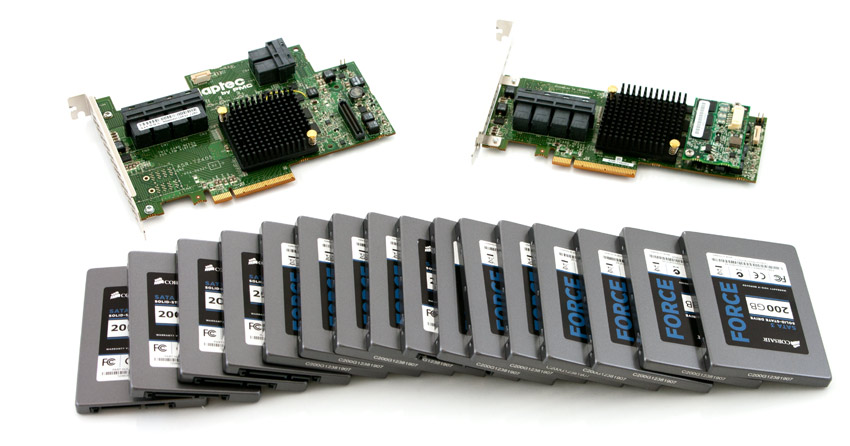 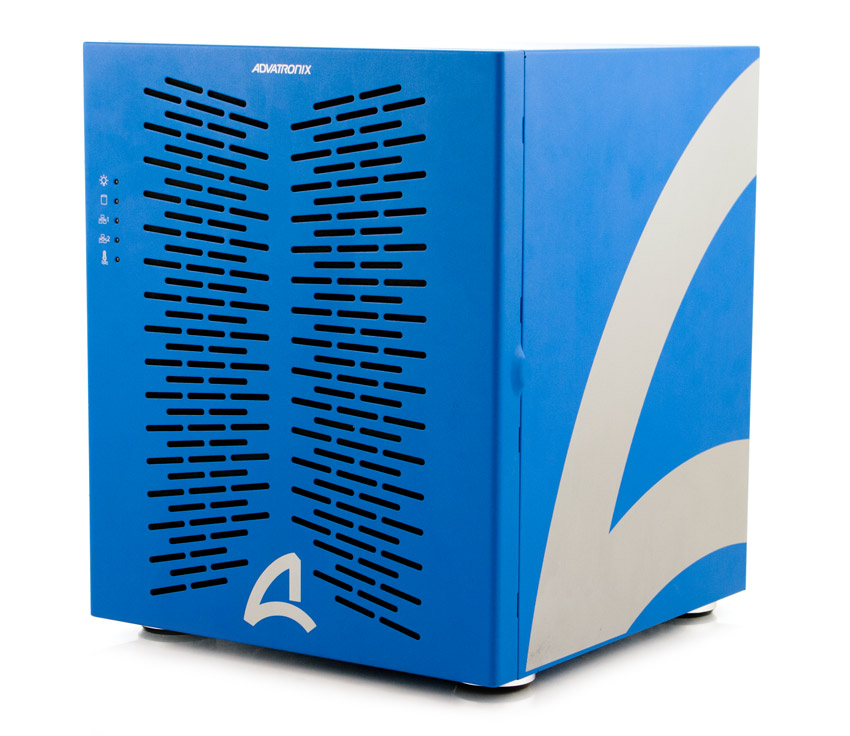 The Advatronix Cirrus 1200 server is powerful alternative to more traditional rack servers. Its comes equipped with Intel Xeon E3 family in either the E3-1220LV2 or the more powerful E3-1265LV2 iteration, which is what we had under the hood. Its relatively small, blue cube-shaped form factor allows the Cirrus a unique size that gives the same internal access as a desktop machine would, making it easy to service and maintain. This Advatronix rig is an enterprise-class server is densely packed with up to 32GB of ECC DDR3 and up to 12 3.5″ drives with 12 HDD bays being front-access and hot-swappable. Essential to the Cirrus 1200 is a single Adaptec 71605Q RAID adapter, with 12 x 4TB Hitachi Ultrastar 7K4000 and 5 x 400GB Micron P400m as attached storage.

The performance of the Advatronix Cirrus 1200 was quite impressive, costing a lot less than other enterprise storage appliances while still outperforming them without sacrificing data integrity or storage capacity. We were able to reach over 100,000 IOPS in 4K random read over iSCSI and saturate 10GbE with top sequential read and write transfers clocking in at 1.36GB/s and 1.42GB/s respectively.

The Aberdeen AberNAS N21L Series arrays are designed completely with SSD-based technology and a priority on high throughput, boasting high IOPS. Its maximum storage capacity is 15.3TB of SDD with a 2U form factor. The customizable nature of the AberNAS N21L, as well as its Linux OS, gives way to the unification of NAS, iSCSI/IP-SAN functionalities, and Fibre Channel Target support into one device, which giving IT departments the choice of NAS or iSCSI, or FC.

Equipped inside the AberNAS N21L is a Adaptec 16-port 7-series, configured with 16 800GB Intel SSDs in RAID5 as shipped. The setup offered good read performance, reaching over 100K IOPS in our random 4K workload and topping 2.8GB/s read in our sequential 128K workload.

Adaptec’s Series 7 lives up to expectations and paves way for a new standard for RAID adapter cards. We spent a lot time putting this card through a lot of different scenarios as well as reviewing it as an integral part of production solutions. With impressive performance and efficiency the 7-Series cards showed strong performance with traditional HDD groups, SSD accelerated HDD groups leveraging maxCache 3.0, as well as all-SSD configurations for peak I/O and bandwidth. With many configurations available of the Adaptec 7-series card, customers are able to leverage the exact port configuration they need as well as integrate into solutions without expanders with the increased port-counts supported on these cards. The ASR-72405 does a great job of juggling a large quantity of SSDs and HDDs, supporting 24 individual connections. Enterprise users that chose to incorporate these cards into their servers and workstations can offer much simpler layouts as a result with greater performance.

The Adaptec Series 7 RAID card family gives system builders and storage admins tremendous flexibility with up to 24 ports without the need for expanders. For those who need a little more performance, the 7Q cards with maxChache 3.0 delivers big gains with modest infusion of SSD flash.

Lyle is a staff writer for StorageReview, covering a broad set of end user and enterprise IT topics.